Canyon artist among Masters; Miley’s artwork to be part of invitational Celebration of Art 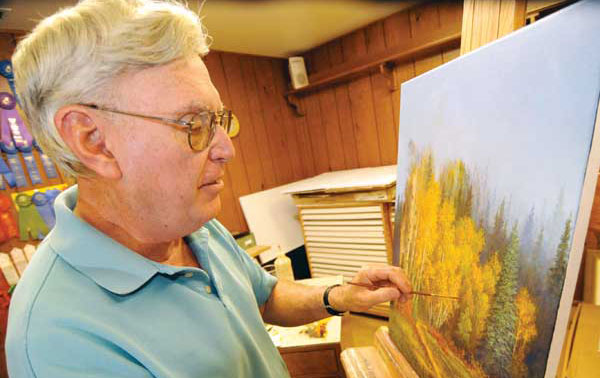 **This story was originally published by The Prescott Daily Courier on 9-14-2009, written by Karen Despain and photos by Les Stukenberg**

Prescott artist Doug Miley’s enchantment with the Grand Canyon’s magnificence has for many years dipped his creative brush in vibrant colors to paint this wonder of the world on canvas.

Because of the canyon’s mammoth size, “You could paint for 100 years and never paint the same scene twice,” Miley said. “You could spend a lifetime painting the Grand Canyon.”

This verve for painting the canyon has entitled him to a place among 20 artists in the Modern Masters Invitational in the first Grand Canyon Celebration of Art on the South Rim of the national park.

Miley, who is basically self-taught, began painting when he was just 8 years old, and the Grand Canyon has been his focal point from the time he saw it when he moved to Prescott from Ohio in 1977.

“I feel honored,” Miley said of the invitation to the Modern Masters Invitational. “This is a show of just a few people across the nation who paint the Grand Canyon.”

Miley’s work is in the Treasures by Art Gallery in Scottsdale, The Windrush Gallery in Sedona and in the Master’s Room at the Mountain Artists Gallery in Prescott.

His work has won numerous awards, including many for his entries in the National Veterans Creative Art competitions, and he was in the top 100 for the National Arts for Parks in 2005 and 2006 and Paint America in 2007. He also was the People’s Choice Award winner at the Phippen Museum Memorial Day weekend show for 2006, 2007 and 2008.

The Grand Canyon Association is sponsoring the Celebration of Art, which begins today, Sept. 14. Until Sept. 17, plein air artists will be painting in the park. On Sept. 18, El Tovar Hotel will be the setting for a quick draw event and auction during the morning, and from 7 to 9 p.m. the Kolb Studio will play host to the Grand Canyon Modern Masters Invitation-Only Gala Reception and Award Ceremony. The Plein Air on the Rim Award Ceremony and Public Reception will be from 10 a.m. to noon Saturday, Sept. 19, at the Kolb Studio.

Proceeds from the show will go toward financing an art museum on the South Rim that will preserve and showcase the collection of historic and contemporary paintings owned by the Grand Canyon National Park and the Grand Canyon Association.